Adam started playing the Euphonium under the tuition of Tony Small whilst attending Penlan Comprehensive School achieving the level of grade 6. He then went to Swansea College where he took up the task of learning to play the Trombone, under the tuition of Andrew George (No relation… 😁😁😁) and Keith Rees, he successfully passed his grade 7 with Merit on Trombone.

His banding career started with Pontardulais town band under the baton of Mr Brian Buckley, where he played 2nd Trombone. Then moving onto Penclawdd Brass Band under Tony Small also playing 2nd Trombone.

He then took a sabbatical from competitive banding but was an ever present member of the West Glamorgan Youth Musical services playing in their successful Brass band, Wind Band, Big band and symphony orchestra ensembles. At this time Adam was successful in gaining a place on trombone with the National Youth Brass Band of Wales and National Youth big band of Wales where he did two courses.

After a friends 21st birthday at the Pontardulais bandroom he was asked to re-join on solo baritone, where he attended the National finals in Harrogate and Leeds.

After 8 years with Pontardulais, he left to go to play solo trombone with Briton Ferry Silver Band. After 4 years with Briton Ferry and numerous successful lower section titles, In 2016 he qualified for the National Finals and 2nd section Welsh league champions for 2016.

He joined Llwydcoed Band in December 2016 and is enjoying playing at a challenging level and competing in the Grand Shield and English Masters. 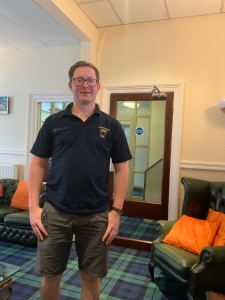 I started playing bass trombone after watching a performance by Grimethorpe colliery band when I was 15 in mid wales. Since then I’ve done music A-levels and I am currently studying music performance at the RWCMD in Cardiff. I joined the band in November 2018.