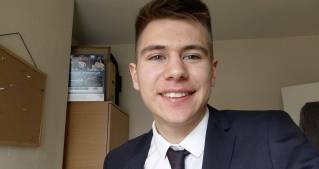 Nathan comes from the west Midlands and is currently studying at the RWCMD in Cardiff. He started playing in 2012 at the Abraham Darby Academy, starting on cornet and soon moved to tuba early on. Nathan has played at the festival of music for youth taking him to the Royal Albert Hall and Symphony hall on many occasions. Nathan’s first brass band experience was playing with Cleobury Mortimer at the 4th section nationals in 2016 coming second under the direction of David Maplestone. Following this Nathan moved to the Staffordshire Band winning the 1st section Midlands regionals in 2018. Nathan now plays with the Llwydcoed band and also plays tuba in the CBSO youth orchestra and various college ensembles keeping him very busy. He has worked with some great conductors including Leigh Baker, Jonathon Pippen and currently Chris Turner. Nathan hopes to make a career out of playing the Tuba and enjoys his time at Llwydcoed Band.

Neve started playing aged 9 in Coleshill Town Brass Band and from there she played with the Fodens Youth Band and was also a member of the NYBBGB. She studied at the junior department of the Royal Birmingham Conservatoire. Prior to relocating to Wales in order to study at the RWCMD Neve was Solo Eb bass with the championship section band Foresters Brass based in Leicester. She has recently become a member of the NYBBW. 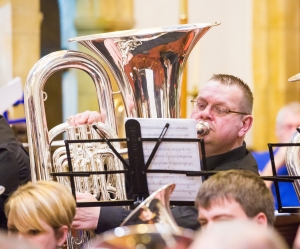 After 14 years at the heart of the National champion’s powerhouse Cory , with a personal tally of major contest winning success that includes five British Opens, two Nationals, four Europeans, three Brass in Concert and eleven Welsh Area wins Fraser retired from playing. A year later after much bothering from chairman Kevin Johnson Fraser joined the Llwydcoed Band. Fraser leads the foundation of Llwydcoed Band with his legendary sound and the odd pedal or two. His experience and advice is invaluable to the band.

Upon moving to Cardiff in September, Tom joined Llwydcoed Brass Band on Bb Bass. Since joining the band Tom has enjoyed much success with the band coming 6th at the Bolsover Festival of Music and most recently coming 3rd in the Welsh Regional Brass Band Championships where the band gained an invitation to the National Finals at the Royal Albert Hall and looks forward to the contest in October.

Kevin started playing at the age of 7 on Baritone in the Merthyr Tydfil Salvation Army under Bill Lewis(who later became his father in law). Kevin Played in the junior band and when he was 15 he transferred to the senior band. Kevin played a number of brass instruments all except the cornet. He was asked to help out Llwydcoed Band in 2003 and has been there ever since. He became chairman of the band in 2006 and is very proud to have played in all 4 sections with Llwydcoed Band and is looking forward to playing in the Championship section Nationally from 1st January 2015.